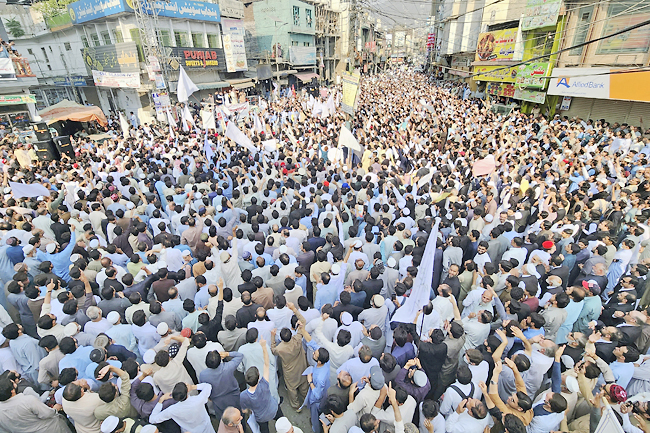 PESHAWAR (AP) — Thousands protested in northwest Pakistan yesterday after a gunman opened fire on a school van, killing the driver and seriously injuring a child, a decade after the schoolgirl Malala Yousufzai was shot dead by the Taliban in the same town.

Monday’s attack took place in Mingora in the Gully Bagh district, raising fears of a resurgence of militant activity in the Swat Valley.

The Swat Valley was the focus of a month-long military offensive in 2009 to drive militants out of the area, but the operation also displaced hundreds of thousands of people.

The mass protest brought the city to a standstill, with businesses and markets closing in solidarity.

The demonstrators demanded the immediate arrest of the attackers and the restoration of peace and order.

A placard read: “We cannot let the hard-won peace be destroyed”, while another read: “Act now against the attackers before it is too late.”

The attack on the school van coincided with the 10th anniversary of Yousufzai’s shooting in Swat for his outspoken support for girls’ education. The Nobel laureate arrived in Pakistan yesterday to visit the flood-affected areas.

The funeral of the driver killed in Monday’s attack had not yet taken place, his relatives demanding the arrest of the perpetrators. A protest also took place in Gully Bagh, with the driver’s coffin being laid in the street. The police took security measures at both places to prevent any violence.

No one claimed immediate responsibility for the shooting. Local police officer Zafar Khan said on Monday a hunt was underway to find the assailants who fled the scene on motorbikes.

Private Schools Management Association chairman Sawab Khan told The Associated Press that all 1,300 private schools in the Swat Valley were closed on Monday and yesterday.

From today, private schools will observe a partial strike and teachers and staff will organize a demonstration.